When Indiana teenagers Abigail Williams, 13, and Liberty German, 14, vanished while hiking on public trails in a wooded area near their hometown of Delphi on Feb. 13, 2017, their families say the girls, who were best friends, had only been gone a few hours.

When Liberty failed to answer calls to her smartphone from her father, who was on his way to pick them up from the trailhead near Monson High Bridge, Liberty’s family immediately began to look for the pair.

Liberty’s grandmother, Becky Patty, says at first, they thought maybe the girls had been hurt or just lost their phone, “So we were just looking for them laying somewhere.”

When, after an hour, they failed to find the teenagers, they alerted the local authorities. “And they immediately came out in full force; started walking the trails with us; started looking for the girls,” says Mike Patty, Liberty’s grandfather.

Community members soon joined in the search, he says. “Most of the town was out. People were out all over the streets of Delphi; flashlights – walking,” he says. “Hundreds of people seemed to be coming out to help us look.”

“People spread out and went through each finger of that trail system,” adds Abigail’s mother, Anna Williams.

The murdered teenagers’ bodies were found side-by-side at the bottom of a hill the next afternoon.

“The girls stuck together right up ‘til the end,” says Mike.

Ten months following their deaths, the identity of Abigail and Liberty’s killer remains a mystery. However, investigators have recovered critical photographic and audio evidence from Liberty’s smartphone that they say with the public’s help could lead to his capture.

Anyone with information that might assist police in their investigation into the murders of Abigail Williams and Liberty German is asked to call the Delphi Tipline at (844) 459-5786.

The Dr. Phil show provides the most comprehensive forum on mental health issues in the history of television. For over a decade, Dr. McGraw has used the show’s platform to make psychology accessible and understandable to the general public by addressing important personal and social issues. Using his top-rated show as a teaching tool, he takes aim at the critical issues of our time, including the “silent epidemics” of bullying, drug abuse, domestic violence, depression, child abuse, suicide and various forms of severe mental illness. 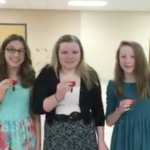